Diversity and inclusion are coded in society. We talked to Jenifer Clausell-Tormos, the founder of Develop Diverse, about the massive potential of leveraging technology, science, and socio-linguistics to help solve diversity, equity and inclusion issues.

In hiring, biases run throughout the whole process - from the first interview and all through an employee’s lifetime within a company. These biases are often revealed in the language we use.

“Language is powerful. With language, we reinforce and bring forth biases every day. Our unconscious bias doesn’t let us see people purely for their merits. We see them through a lens coloured by the university they graduated from, if they have a family, how old they are, etc. This causes us to make assumptions about people”, Jenifer Clausell-Tormos, CEO and founder of Develop Diverse says.

Founded in 2017, Develop Diverse is a platform which helps companies attract and retain diverse talent by using science and socio-linguistics research to see what stereotypes exist in society and to avoid unconscious bias in texts such as job ads and corporate communication.

“We know from research that a lot of talents meet stereotyping at the workplace”, Clausell-Tormos says as she explains why Develop Diverse is currently focusing on implementing their software in work environments:

“In the end, we aim for our software to break down stereotypes in society.”

“Diversity is a skill”

Originally from Valencia, Spain, and with a solid interdisciplinary background straddling fields like physics, biomedical, chemistry, and mathematics, Jenifer Clausell-Tormos, PhD, moved to Denmark in 2012. Having grown up in a family with traditional gender roles, she struggled to understand why gender defined the rules of what happens within and outside a house.

Struggling with gender stereotypes, Clausell-Tormos explains, pushed her towards wanting to bridge this gap and empower people with knowledge about these biases.

When asked exactly how Develop Diverse works, she describes it as a spell checker that looks for biased word use: “Awareness is the first step to change our behaviour. The idea of Develop Diverse was that the software could educate a user to eventually trigger a change of mindset”, Clausell-Tormos says. 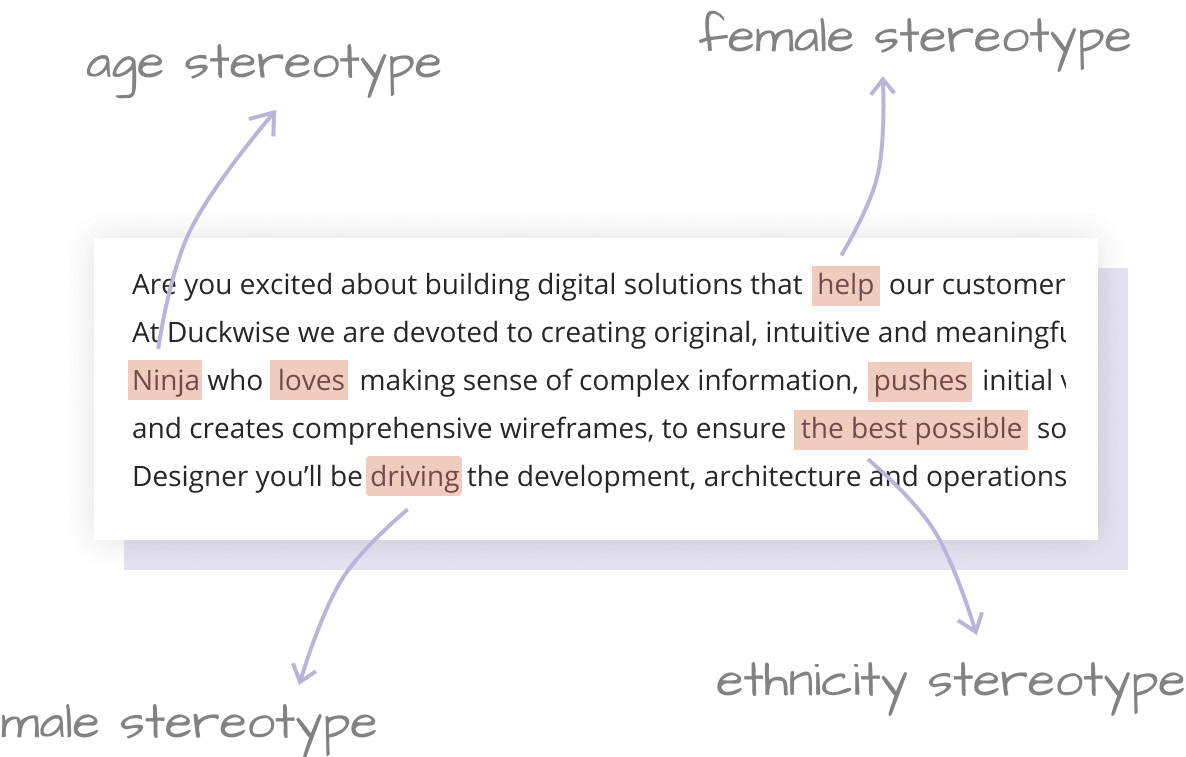 “People tend to forget that diversity is a skill”, Clausell-Tormos explains: “Startups and scaleups must prioritise diversity and inclusion to improve talent attraction and retention, and to reap the benefits that a diverse workforce has on every aspect of an organisation.”

Algorithms to combat the bias code

Hiring the right people is a tough job. The more you grow, the more you hire, and the less obvious it becomes if there’s a lack of diversity in your organisation. This is why it’s important to build diverse teams from the get-go.

So, how can algorithms and science help us on the path toward hiring more diverse talent and creating more inclusive company cultures?

Algorithms are human-made, and thus can also be biased. But by leveraging what’s called ‘natural language processing’ - the application of computational techniques to the analysis of natural language - algorithms can find implicit bias in text in a scalable way.

The algorithm looks at how humans and words connect via patterns e.g. the frequency of a pair of words and their separation in a text when it comes to topics like religion, age, gender, nationality, neurodiversity, and so on to leverage diversity in the recruitment processes.

At Develop Diverse, an inclusive environment is about being proactive. Proactive in building a safe space for people to speak up about both invisible and visible diversity traits, flexible work hours, dietary preferences, etc. In their offices, they also have a specific room for silence, meditation, or prayer.

Clausell-Tormos mentions internal feedback and metrics are key in making people feel like they belong and are being heard. Having small metrics in place is a way to track whether or not you’re finding the right talent by using the correct approach. “The diverse society that we have is often not represented in companies, and metrics can be a way of representing real people.”

As for her biggest takeaway from building a startup tackling diversity and inclusion, Clausell-Tormos says:

“It’s important to build a safe environment in a company if you want to build a successful company. We tend to forget that a company's success is based on the success of the people in the team. An inclusive environment is part of that. Motivation gives rise to creativity, happiness, and belonging.”