Denmark’s position in the top five of the DESI digital readiness index has shown its value during the corona crisis with ample scope for home working. This has vast implications, says Janus Sandsgaard, Head of Digital Policy at Dansk Erhverv, The Danish Chamber of Commerce. 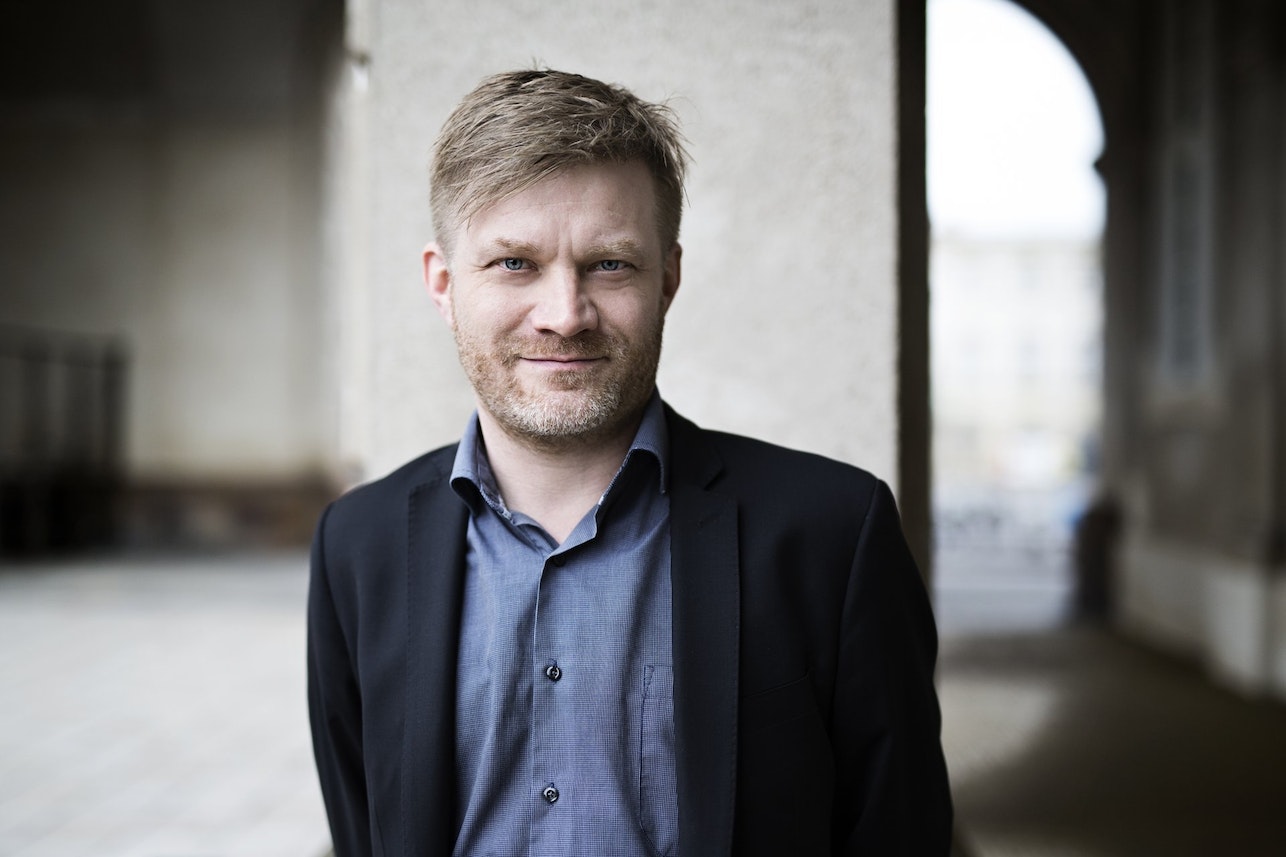 Up until recently, the mere idea of working from home a few days a week remained a utopia in the mind of Janus Sandsgaard, who is Head of Digital Policy at the Danish business association Dansk Erhverv.

He was well used to turning up five days a week at the organisation’s historical seat in the centre of Copenhagen. There were meetings to attend, and colleagues to spar with.

But today, home working is no longer a utopia, and this is one of the positive consequences of the corona crisis.

“Many of us are discovering the amount of hardware and infrastructure we actually have at home but never used. Suddenly it’s an everyday thing to do meetings and screen-sharing and all sorts of things online. For me personally, it’s inspired me to look for a house in the countryside with my family. I have my own little dream of working with just chickens as the nearest neighbours and only commuting to Copenhagen when it makes rational sense to do so. Technology should serve humans. That goes for me and my little chicken dream, and it goes for all of society and the big challenges we face,” Janus Sandsgaard says.

“And it shouldn’t be a crazy moon dream. For years it’s almost been the Microsoft’s slogan that work is an activity and not a place we go to. Sometimes it makes sense to have that activity online, at other times we clearly prefer physical meetings.”

Figures from Dansk Erhverv show that some 15 percent of the organisation’s members have used the option of having their staff working from home in some way or another during the crisis.

To Janus Sandsgaard, tech and digitalisation are nothing new. In the late 1990’s, he was part of the first world wide web wave in Denmark. Later, he moved to a key position as a civil servant in a ministry that developed some of Denmark’s first digital public-service solutions. For the past seven years, he has been an active voice in the Danish debate on technology and digitalisation on behalf of Dansk Erhverv.

Consequently, he was paying more than close attention on March 11, 2020, when Danish prime minister Mette Frederiksen imposed a nationwide lockdown. Was the country really ready to put to the test all those decades of efforts to build a digital infrastructure?

“It threw many people off the deep end, but it turns out that we actually can swim,” he says.

And perhaps that is not so surprising after all. Denmark has ranked high on the digital readiness index DESI, or Digital Economy and Society Index, for several years, but mostly that ranking was just something to boost our national pride. Now we have seen it actually being put into practice in completely extraordinary situations.

“We are digitally spoiled in Denmark. Our broadband push has made us used to accessing large amounts of bandwidth at low prices, and people have shown a big appetite for digital solutions,” he says.

And that has left its mark on many parts of Danish society.

“I recently became a father, and my 73-year-old mother just got a new tablet to stay in touch through Skype. Digital readiness applies to most citizens in our society, because we’ve lived with it for so long,” he says.

Technology’s potential is unleashed when we understand it’s limitations Denmark’s digital readiness has also made the country quick to recognise the limits of technology.

“It’s fundamentally healthy to raise our stakes and expect a lot from these technologies, and we shouldn’t put up with solutions where humans have to adapt to technology. Over the past few weeks especially, we’ve also quickly learnt what doesn’t work so well on a digital channel, such as building relationships with other people, or close collaborations or negotiations where it’s important to have your antennas up and sense the atmosphere in the room,” Janus Sandsgaard.

“I think many of the politicians in parliament will agree with this from negotiations to reopen Denmark. Last, but not least, we’ve also rediscovered how much we enjoy getting away from the kids and the dirty laundry and going to the office, with all that it entails in physically working together to get new ideas and having social chats in the staff canteen,” he says.

Recognising the limits of technology is almost as important as seeing the possibilities, as having a realistic and pragmatic view of both makes way for a more sustainable foundation in the long term.

Why Denmark is passing the corona challenge with flying colors

The digital corona experiment gets a definite ‘pass’ mark from Janus Sandsgaard.

“But of course this is far from just a technical stress test. It’s also an extreme social experiment. It’s been too much to bear, which shows that it’s naïve to image a happy screen-based life. That goes for me, my colleagues, my collaborators, and for my oldest daughter who has, understandably enough, been cracking up over a miserable first year of secondary school, wasting the spring away behind a screen. But these are all experiences that we can take with us and build on,” he says, pointing to a number of different perspectives.

First of all, our ability to work from home shows that, by thinking in new ways within a digital reality, we can actually use our new habits to reduce carbon emissions and live up to Denmark’s ambitious target of a 70 percent reduction in greenhouse gasses by 2030 from 1990 levels.

Second, Danish companies will have much wider options for attracting key skills from across the country and the world as the ability to work from home becomes more and more ingrained in organisations and Danish managers become more accustomed to managing remote workers.

Third, according to Janus Sandsgaard, the experiment shows that there are many reasons for Danish policymakers to continue pursuing an ambitious digital journey – even while, at first glance, it may look like everything is now as it should be. 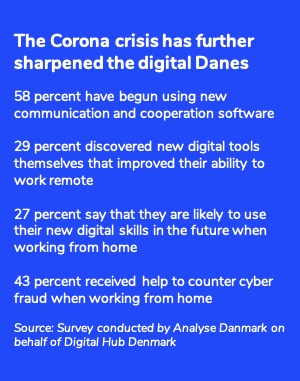 “When I was a civil servant 15 years ago, we worked with people who honestly believed that we would never ever need a broadband connection of more than 10 Mbit. But luckily that did not stop the development of the broadband market, and that continued expansion has laid the foundation for where we are today,” Janus Sandsgaard.

If we are now enjoying the fruits of being ‘digitally spoiled’, it comes from a foundation that was built some time ago. Now is the time to expand that foundation, Sandsgaard believes.

“Corona crisis or not, there is a need to push digitalisation higher up on the political agenda, because politicians have been able to use the DESI index to claim that we’re doing fine in Denmark. It’s also been really easy to understand that using digital letters saves us money on stamps and replaces them with digital stamps at a fraction of the cost – but surely our imagination and our ambitions shouldn’t rest there. The corona crisis has also shown that we need to keep reimagining our learning, ways of doing business and social relations,” he says.

Right now, the challenge is solving some of society’s biggest challenges, and digitalisation plays a crucial role in this. That was made abundantly clear with the Danish government’s climate partnerships.

“The biggest danger in having a top ranking in the DESI index is that politicians might become complacent. I’ve just become a father again, and it’s great that I can register the baby’s birth using my NemID digital signature rather than having to make my way down to the church office as was the case sixteen years ago. But that’s just a small thing that makes things easier to be me and saves me a stamp. We shouldn’t just settle for efficiency improvements and cost savings. We should be using digital technologies to create new value, innovate and make a more flexible and robust and sustainable society. There is plenty of potential yet to harvest,” he says.

A core prerequisite is also to ensure data security, and while the term itself may be boring many people to tears, it remains an important subject. And we are well on the way in Denmark. The Danish Industry Foundation, or Industrifonden, a philanthropic foundation that seeks to promote the competitiveness of Danish industry, has made a grant of 18 million Danish kroner towards boosting data security among Small and Medium Enterprises through a scheme that is being developed in collaboration with the Danish Consumer Council, Tænk, the SME organisation SVMdanmark and Dansk Erhverv.

“Few companies have reason to fear targeted industrial espionage, but they need to beware of common thieves who are finding new digital ways to operate,” he says.

While there are still many challenges in Denmark, Janus Sandsgaard believes we have one of the best starting positions for setting off on the next big digital sprint.

“In many countries, interaction with the public sector is still handheld and physical, and there are examples in Germany of internet commerce by telefax. There’s no doubt we have a great starting point for taking the next steps, so long as we remember to keep people at the heart of it all – and recognise that we’re also social creatures in body and soul that need other ways of collaboration than just through a screen. Perhaps in the end that’s the difference between being a digital simpleton of the past and a competent digital citizen of the future,” Janus Sandsgaard says.