Test, contain and repeat. That appears to be the dominant strategy to combat the pandemic. A crucial and vulnerable ingredient of this strategy has been health care workers, who have risked infection during testing. Until now, a team of Danish scientists have created a throat swabbing robot that should be ready to leave the lab by late July 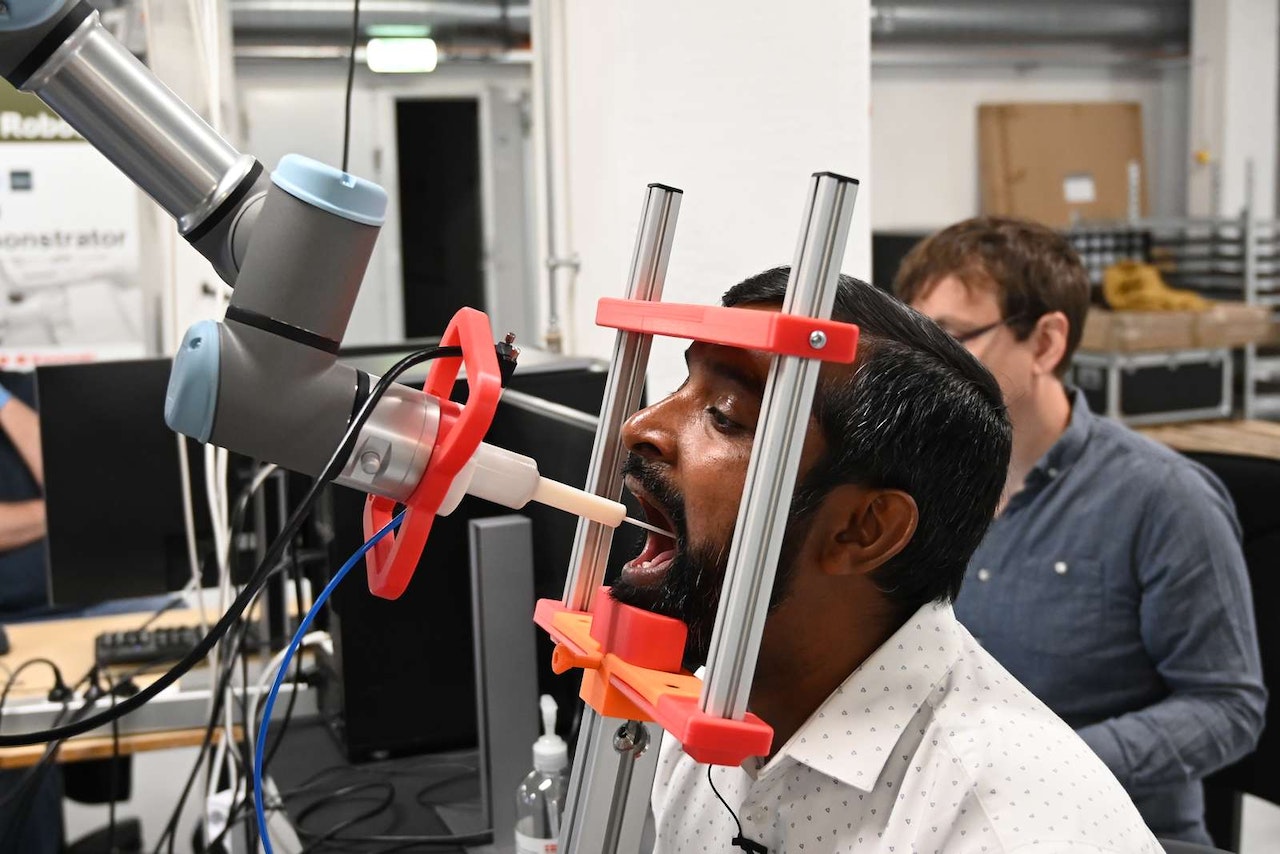 Four weeks. That was the time it took a team of the best and brightest robot scientists to go from idea to fully automatic throat swabbing robot. The first one of its kind that the world has seen. The team is hoping to swap the first Covid-19 patients by late July this year.

The high-tech robot hits the – so to speak – the sweet spot in the patient’s throat with a swab that it holds with a custom-designed, disposable and 3D-printed tool. The robot then transfers the swab to a closed glass container and seals it off to contain any possible contamination.

“I was one of the first to be swabbed by the robot. It went well. I’m still sitting here,” Project leader and Professor at SDU Robotics, Thiusius Rajeeth Savarimuthu, says smilingly. 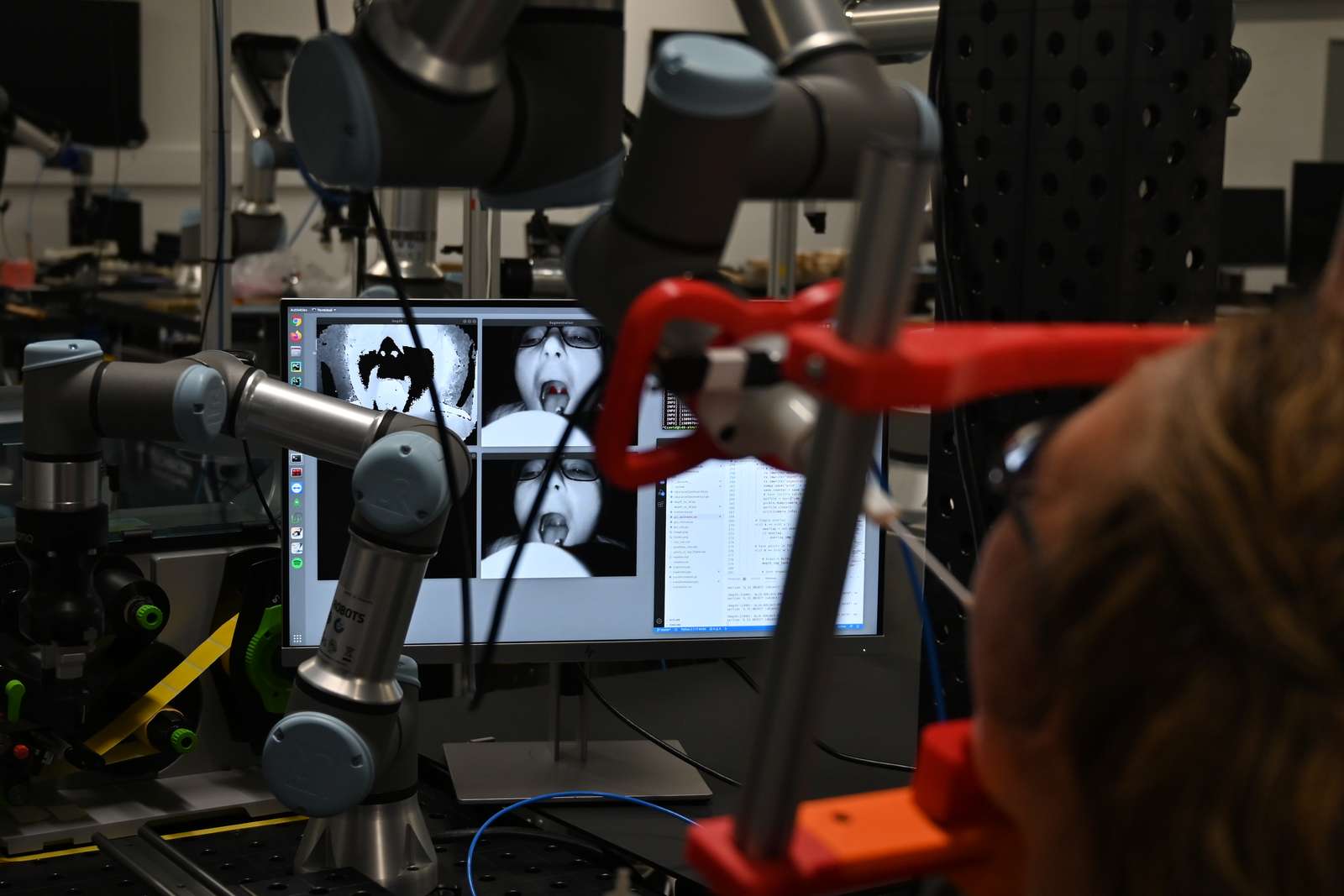 “It took me by surprise how softly the robot managed to hit the exact right spot in the throat with the swab. So it was a big success,” Thiusius says.

Scientists have been working day and night

Behind Thiusius stands a team of ten scientists that have been burning the afternoon, daytime and midnight oil at the University of Southern Denmark to develop a prototype of the robot as quickly as the parts could be put together.

“We’ve successfully demonstrated the world’s first fully automatic swab on delivered a ‘Proof of Concept’ of the processes involved in a robot swap,” Thiusius highlights.

And that’s the whole point. An end-to-end fully automatic solution that can replace and protect our first line of defence: Healthcare workers.

As May dawned upon our Corona-riddled world more than 90.000 health workers, globally, had been infected with Covid-19 according to the International Council of Nurses. While machinery and masks are essential weapons in the fight against the pandemic, if no one can operate or wear them, they are of little difference.

From lab tests to throat swabbing patients at breakneck speeds

In Corona’s looming shadow, the scientist developed a robot, which can not only throat swab with both precision and care but can perhaps most importantly safeguard healthcare worker and free up their precious time. Now the robot is ready to leave the lab.

“We have created the company Lifeline Robotics, where our vision is to get the robot out to do good on the global market as quickly as possible: in airports, in refugee camps or where else it might be needed,” Søren Stig, director of Lifeline Robotics, says.

While the scientists have been hard at work on the robot, Søren has been working hard to secure investments and assemble a team to turn the novel invention into a global, commercial success.

The team behind Lifeline Robotics is hoping to bring their robot to market by the end of July. Heavyweights like the co-founder of Universal Robots and investment company REInvest Robotics, Esben Østergaard, and Vækstfonden support the project. If everything goes according to the ambitious plan, the robot will be swabbing real patient’s throat in a month.

“The Covid-19 pandemic abounds. The ambition is, therefore, that we must get on the market as soon as possible. The plan is that we have a prototype that swabs patients by the end of June and that the robot is completed and ready for the market this fall when the second Covid-19 wave hits” Søren emphasizes and continues:

“Everyone on the team is working incredibly hard. If everything goes according to plan, we will have achieved in 3-4 months, which usually takes three years.